With Your Pants Down: Why the Fighting While Seated technique isn't cinematic


In GURPS, there are several stances characters can be in. They can be standing, kneeling, crouching, sitting, prone, or laying face-up. Most of these stances other than standing provide some kind of penalty to (melee) attacks and defenses. In Martial Arts, there are several techniques that allow you to buy off the penalties for using a specific combat skill from a low posture, such as Low Fighting (for kneeling) and Ground Fighting (for prone). There's also a technique for fighting while seated, called, appropriately enough, Fighting While Seated.

This technique is cinematic, since, as Martial Arts puts it, "sometimes a skilled master will show contempt for an inferior opponent by fighting while sitting down". Indeed, this must be true. Why else would you remain sitting while someone is attacking you? The posture has no benefits and no mobility, so clearly, anyone who trains specifically to fight and parry attacks while seated is foolish and simply trying to show off. This has no benefit as a realistic technique.

So, what if someone tries to stab you in the bathroom?

That's really the blunt question I have for everyone with this preconception. What if someone attempts to stab you while you are sitting in a car, in the bathtub, on the porcelain throne, or having a meal, or sitting seiza in front of your lord when someone else draws a knife and attacks him?

The common argument I've heard against this last one, by the way, is "If your lord doesn't allow you to stand up to fight the nasty man with a knife, he probably deserves to die". The trouble with this logic is that knife attacks - and all combat, really, that happens in civilian life - happen blazingly fast. You will often not realize you are being attacked until the moment comes that you have to parry, and I'm sure an intrepid reader will note that you cannot stand up until it is your turn to take a maneuver.

If you are sitting on the toilet when someone opens the bathroom stall door and stabs you in one fluid motion, that -1 to parry suddenly seems like a very big deal.

I'll be honest, this is an extremely nitpicky thing to complain about, but I feel honor-bound to challenge this idea. The idea of learning to fight from any particular disadvantageous position is not silly. It is not a commonly learned technique, and it has a niche use, but there are realistic uses for it, at least for unarmed grappling or striking styles. The fact that I have heard and seen cases of people being attacked by screwdrivers while sitting in their car compels me to educate on the subject.

Let's also not forget that one of the most famous Renaissance era knife fights, the death of Christopher Marlowe, involved someone parrying while sitting down. Ingram Frizier, Marlowe's killer, was sitting at a table while Marlowe laid on a couch. After an argument, Marlowe drew a knife and stood, attacking Frizier with the knife. Frizier managed to gain control of the knife and stabbed Marlowe fatally in the head. Frizier was later judged to be innocent, as he acted in self defense. Frizier's account of events has been viewed with incredible disbelief today, as how could someone possibly intercept a knife attack that is coming in while they are sitting down, relieve the attacker of his knife, and kill him in one or two blows? The entire thing seems very farfetched, and if it appeared as a piece of testimony in a modern court, it would likely be viewed with incredible suspicion. 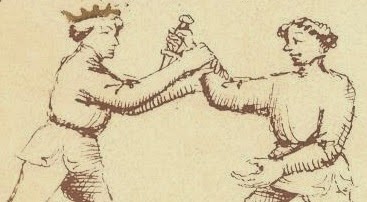 The simple answer is is that people in the middle ages and Renaissance were intimately familiar with the realities of knife attack, and created entire systems of combat designed to deal with them, many of which involve grabbing and twisting knives out of the opponent's hand, sometimes from awkward positions in the midst of grappling. Fiore de'i Liberi's system of "covers" - Judo parries that lead to control of the attacking dagger arm - can be applied from any number of positions. The Judo Cross Parry on the right can be done sitting down, standing up, kneeling, or even on your back, and given the nature of knife fighting and assassinations, there are dividends in learning to do it in many of these postures. Being able to parry and disarm a knife attacker while you are immobile in any posture, including sitting, can save your life. It certainly saved Frizier's. How much would you wish to bet that Frizier, afterwards, would be very interested in studying this supposedly cinematic technique?

"Afterburner" is the blog in which Jetman123 posts the various thoughts that rattle about in his head about GURPS, and about tabletop roleplaying in general.